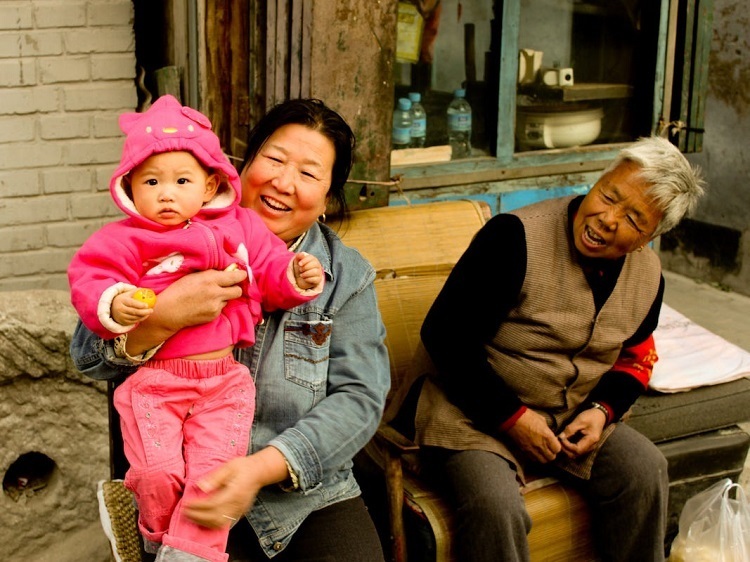 Jenkins moved to China in 2019 with her husband and two children. Her husband had gotten a job there and worked in CHina for two years, after which the family left China. In her time there, she immersed herself in Chinese culture, especially where it had to do with family life.

Confucian tradition is still very strong in China and the elderly have a place of honour. The idea of “filial piety” resonates with many Chinese and the elderly are not only sought for their advice, they are encouraged to be forthcoming. Older adults feel very free to give their opinion on parenting matters. Older adults are very involved in the day-to-day lives of their grandchildren. You could think of them as co-parents to a child’s real parents. The sense of community and the centrality of the elderly means that you have to get used to things that would seem odd or even outrageous in the U.S. A senior may tell you your child needs to wear warmer clothing because it’s too cold, or they may advise you on how to rear your child. This is very different from the U.S. where if someone disagrees with your parenting, they’ll usually give you a weird look, or trust that you know what you’re doing.

In the United States, the majority of people are monolingual. This is very different in China, where in many schools, it is expected for a child to be at least bilingual, with English being mandatory in certain schools. Children love to mingle with Westerners because it gives them a chance to practice their English-language skills. Jenkin’s son’s teachers were amazed that he did not have a weekly Mandarin tutor. Many families in China take learning languages very seriously.

When Briggs wrote her work on Eskimos, she noted that parents in Eskimo communities were not expected to raise a child on their own. Bringing up a child is too difficult a task to leave to parents alone. The pressure, the expectations, the responsibilities and the risks of failure are too much for most parents to handle. Many societies recognize this and help parents raise their children. Grandparents are heavily involved in the raising of the child. Many families are happy to hire a yuesao or postpartum nanny, to help raise their child and cook. In many American households, the idea of hiring help or of heavily involving grandparents in the raising of a child, seems foreign. When a baby has grown up a little, families will hire an ari, which literally translates to “auntie”. An ayi will do whatever the family needs, whether it is helping with house chores, being a nanny, cooking, watching over pets, paying bills, shopping and other tasks.

This really tells us a lot about how we can reimagine certain aspects of parenting to give parents more support. For more parenting ideas, read more articles in the Atlanta Parent Magazine.

A Definition of Data Management for Beginners