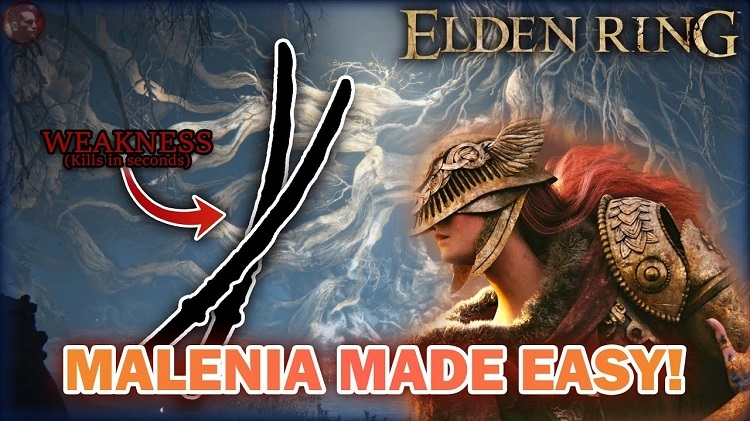 Elden Ring is of enormous proportions. The Lands Between is packed with things to do and see, such as deleted content that reveals entire quest chains and some of the most impressive drip in the game. However, despite this, there is a vocal group of players who won’t stop demanding a taste of that delectable DLC. Despite FromSoftware having said very little about add-on content for its most recent Souls-like game, the topic of downloadable content is brought up on a regular basis in the official subreddit for Elden Ring. And now, a player who goes by the name JPNBusinessman has decided to undertake an intriguing self-imposed challenge. He plans to beat Malenia, Blade of Miquella, every other day using a different build up until the announcement of the Elden Ring DLC.

You could possibly recall Malenia. Let Me Solo Her, a legendary player who just recently defeated Malenia for the 1000th time, has a thing for this fiery-haired goddess who features prominently in the lore of the Elden Ring and who also piques his interest. The Blade of Miquella is very popular among fans. They have created fan fiction and fan art based on her character.(It goes without saying that there is porn.)They have discussed whether or not she would prevail in battles against other FromSoft characters such as the Wolf, who is the main character in Sekiro. There are even some incredible Malenia cosplays floating around that do a great job of capturing the imposing beauty of the character. Reddit user JPNBusinessman felt compelled to share his enthusiasm for Malenia in light of the widespread adoration for the character with Elden Ring runes. The solution he came up with was to engage in combat with her every other day, but this time, he would change his appearance to something entirely different each time. It’s pretty crazy stuff to be honest.

Since April 25 of this year, JPNBusinessman, a teacher in the fifth grade in California, has been battling Malenia. However, in contrast to LMSH, JPNB employs an entirely fresh strategy each and every time he enters the Elphael arena to do battle with the Blade of Miquella. After each victory, he writes about it on the game’s subreddit, sharing any pertinent details (such as the build and the inspiration) along with a content receipt of the evidence.

According to JPNB, “My favorite build would have to be my Sellen one because it forced me to think outside the ‘nuke everything’ box that spellcasters tend to focus on.””Instead, I concentrated on making use of the game’s enormous variety of spells so that I could select a spell for a number of different circumstances. My first build, which was a straightforward Rivers of Blood one, is probably the one that I dislike the most. During that time, I was unable to “no-hit” (kill Malenia without being hit) without relying on the weapon skill known as Corpse Piler. This ability “basically melts every enemy, except for a few bleed-resistant ones.”
But the aspect of his battle with Malenia that occurs every other day that people find the most endearing is the source of the ideas. As a teacher of fifth grade, JPNB engages in daily interactions with a diverse group of students, gaining familiarity with the routines and personalities of each of them in the classroom setting. These students of his are one of the sources of motivation that contribute to the Elden Ring builds that he does.

When choosing a character’s build, JPNB considers the player’s personality as well as the type of in-game character or archetype that would be a good fit for them.”For instance, I have a student who frequently deflects praise with sarcasm and prefers to keep a comfortable distance from his friends. Because of this, I devised a build in which you use a massive golden shield to deflect Malenia’s attacks and a heavy thrusting sword to push her away from you. Another one of my ideas is inspired by a student who, when working on group projects, does absolutely nothing but give directions to the other students (although the group still manages to succeed). It would be a build in which you called forth a large number of summons and then retreated to a secluded area while they battled Malenia on your behalf. They have no idea that I’m picturing them vanquishing a demigod in my head.

Ouch. You’ve been read the riot act, but it’s all in good fun. Talk about being read the riot act. JPNB stated that his students “probably would think that it’s awesome and want to find out more about the game and what builds are based off of them.”However, being a teacher can be strenuous work, and although he does not assign a significant amount of homework, he does test his students on a regular basis. JPNB mentioned that he has “caught himself grading in between deaths.”

It isn’t just his pupils who have served as a source of motivation for him. JPNB cited LMSH and Reddit user Atijohn, who was battling Sekiro’s final boss every day until the Elden Ring dropped, as other influential figures in the development of this challenge. Even going so far as to imitate LMSH’s build by giving it a single-sword spin, he said that the goated player “helps balance out the toxicity that comes from the competitive part of Souls games.”However, he wouldn’t want to be LMSH because what he does “takes twice as much time” as what JPNB is attempting to do here. This is why he wouldn’t want to be LMSH.

For the time being, he will simply continue to play Malenia by himself until additional content related to the Elden Ring is made available. Already on his fourteenth day, he has compiled additional construct ideas into a spreadsheet that he consults on the way to work each day. In terms of potential ideas for downloadable content updates, he is interested in the standard fare, such as new bosses, lore, and weapons. In addition to all of that, JPNB is keeping their fingers crossed that FromSoft is working on something more specific.